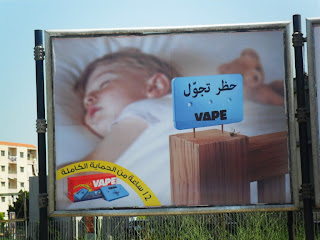 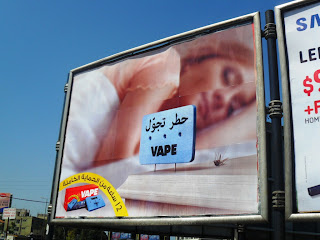 I tried not to see the racist implications in this ad, but for the life of me I couldn't!... Let's see the facts before the paranoia: A cute ad from Vape (anti-mosquito) right there at the onset of summer. Usually they have ads which are quite nice, and this one - on face value - joins the others. I simply says "curfew" next to people who are sleeping soundly.
Cool. So how come I am up in arms? Check this, lately, the ONLY news in Lebanon related to "curfews" has been those illegally imposed by municipalities against displaced Syrians (check here, here and here). So whomever did this ad - WILLINGLY - inserted the connotation that Syrians equate mosquitoes. Which is totally unacceptable, no matter where one stands on the political fence.
Several people told me I was seeing things in the ad which were not there - fine, I am trying to apply the voice of reason and perhaps I may be paranoid. But in this case, can anyone tell me how come the radio ad for Vape is done in newsflash style with a curfew being announced, while the voice-over adds "but this curfew is not for PEOPLE, it is for MOSQUITOES" (insert canned laughter here)?
I find this totally unacceptable. And it has nothing to do with a political stance, it has to do with human dignity. And no, I am NOT seeing things in this ad which are not there. Besides, if you're paranoid, it doesn't mean they're not out to get you!
Posted by Tarek Chemaly at 7:08 AM

I really think you're over-analyzing this. It's actually bringing a funny breeze to its sick older sister

Elia, in this case... How come the radio spot is about a news flash about "this is not for people this is for mosquitoes"... Who has been under curfew in Lebanon lately except Syrians? And illegally at that.

The first time, I got the "message-ad" on the phone, I felt bloodstream stop flowing in my body, before realizing that it is meant to be a joke/ad. And it really bothered me. The "curfew" in itself is so LOADED with hard times, let alone the syrian analogue. I think the person who came up with the concept, did not live the war. As someone who lived through all the war years, I consider this campaign such "a faux pas".
Thank you for your post Tarek. "facheytelli khelkeh"
L

I'm not saying it's unrelated. I admit it's its sister. If a subject is too ugly it doesn't mean you can't turn the situation into a more useful one!

True. This being said, I think I prefer to err on the side of caution.