Tramway Beirut - the end of the line 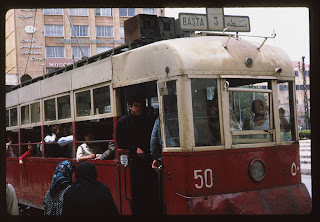 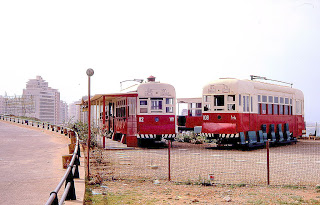 I often wondered what happened to the Beirut Tramway. There are some historical details on the net, but they vaguely amoung to it being taken off circulation sometime in the 50s. Of course, the name is classicaly linked to late comedian Ibrahim Merachli's song "Tramway Beyrouth" (sample line: "rizkallah 3a iyyamak ya tramway Beirut, chalouk li2annak deghri w btimchi 3ala sikki dighri" - "we long back to the times of tramway Beirut, they took you off because you are straight, and go along a straight path" ).
I rummaged the net and came up with these photos, what is interesting is that 4 old trams had been converted to a cafe which stood opposite the now defunkt Carlton Hotel. And even these were taken off in the early 80s (again, according to the net).

Posted by Tarek Chemaly at 7:19 AM

I remember the tramway! As a child, I had nightmares of being run over. By the time I returned to Beirut--there was no more tramway.

In the late 80s the train from Beirut to Jbeil was activated for a very, very short period of time... I didn't get it though!

it had a brief stint in the early 90s as well.

Interesting, did not know about that.