Aie Dance by Deborah Phares - soon in a theater near you 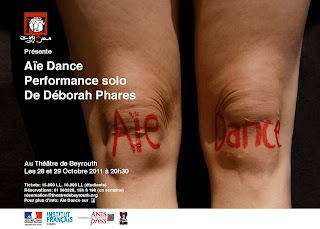 Deborah is a copywriter who graduated from Académie Libanaise des Beaux Arts (ALBA), where she has been teaching for the last 6 years in addition to lecturing at the Lebanese University.

She dabbles in illustration, interactive installation, photography, object design, as well as other disciplines. Her “Madmozél” character – now in its 3rd year of weekly running in l’Orient le Jour– has become a staple of social satire for a de...voted audience.
Never too far from the theatre and its ramifications, she played in almost a dozen plays (with Nadine Mokdessi, Vincent Colin…), attended several workshops, even facilitated other such workshops and directed several stage events with teenagers.
She has been fascinated with dance since childhood, but a series of complications have forced her to stop training and practicing for 13 years. Now she is back and invites you to explore – in her very personal universe – the theme of the invisible pain, which inhabits the body of the dancer.
"Aïe Dance" is a solo performance, which intermingles personal stories, classical ballet, contemporary dance, oriental dance and contortions.
Posted by Tarek Chemaly at 10:07 AM