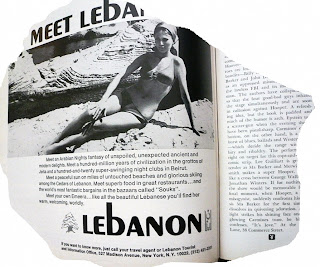 I stumbled upon this on the net and was about to fall on the floor… First please read the text below:

“Meet Lebanon
Meet an Arabian Nights fantasy of unspoiled, unexpected ancient and modern delights. Meet a hundred-million years of civilization in the grottos of Jeita and a hundred-and-twenty super-swinging night clubs in Beirut.
Meet a peaceful sun on miles of untouched beaches and skiing among the Cedars of Lebanon. Meet superb food in great restaurants, and the world’s most fantastic bargains in the bazaars called “Souks”.
Meet your own Emeera… Like all the beautiful Lebanese you’ll find her warm, welcoming, worldly.”
I am still trying to recover my spirits from the “unspoiled”, and the “peaceful sun on miles of untouched beaches” without mentioning the “world’s most fantastic bargains in the bazaars”… Naturally, the ad is old (it is undated, but my assumption – from the style of the bikini – is that it must go back to the early 70s before the onset of the war). Maybe these superlatives and catchy words did apply back then…
But what is bewildering is that this is an official advertising for Lebanon endorsed by the ministry of Tourism with the official logo on it and it features a barely clad seductive woman who might have become someone’s “Emeera” (that means “princess”) or who – for all we know – has done it for love or for the love of money (we all know that the industry was quite as rampant back then as it is today).
But, and I think this is the most stunning point, just delve closely into the photo (NO, not to lower part of the bikini!) but rather to the right-side corner. At the end of the article is that small only-too-recognizable bunny. The advertising actually ran in… Playboy. Yes, our Ministry of Tourism has actually used public funds to promote the image of the Lebanon through the pages of the famous soft porn magazine….
Actually, I think this is an act of brilliance! This is exactly the kind of audience Lebanon needed – rich cosmopolitan single men with nothing but extra money to spend, or simply males between the ages of 25-45 outgoing, adventurous, looking for an exotic taste of the Orient and ready to backpack on a budget (mind you, at the time “Playboy” was also a magazine that published avant-garde literature, so its audience also comprised intellectuals and “indy” men).
Now, imagine this happening today… Do you think this advertising, and specifically this media buying in a magazine such as “Playboy” would have made it to the official policy of the ministry?

Posted by Tarek Chemaly at 7:13 AM

I love love it! Those were the days!

great post. do you have the issue number and the year ? Thks!!

this is a great post! It also happens that I love archives! I wish I had seen your post earlier as I just submitted a paper about women and gender violence in Lebanon! thanks!

Please note my archive is really very big, so feel free to contact me should you wish to see if there is anything that pertains to a specific topic.