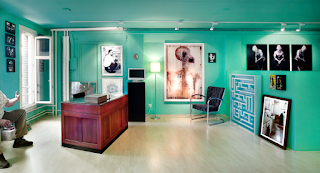 Aarnout Helb is not your typical museum curator. He is - as the English expression says - "head chef and bottle washer" of the Greenbox museum in Amsterdam, Holland which specifically deals with contemporary art from Saudi Arabia. You might be forgiven to think, like me, that "contemporary art from Saudi Arabia" is an oxymoron, or a the local Saudi proverb says, "three things do not exist, the phoenix, the oogie, and the loyal friend" - until recently, my lexicon included four things, "Saudi contemporary art" was the fourth until Aarnout Helb proved me wrong with the Greenbox museum collection.
The museum, where he is a one-man army as I mentioned before is housed in an non-descript office building and makes a full time job for Helb, mind you "job" is a misnomer as this job takes money away from the pocket as opposed to putting anything in - save for the nominal fee he charges visitors. As things stand Helb does not have a board for the museum or sponsors and says he is still "enjoying himself" with the whole venture. He might think in the future of donating the collection to a bigger museum - perhaps we might see the "Aarnout Helb hall at the Cobra museum" I joked, to which he smiled. Helb has no side job but this, so it is indeed a laudable effort for him to keep investing in it. Below is the Q&A I had with him which shows the oblique sense of humor the Dutch have.

The idea of a museum for Saudi Arabian art conjures images of kitschy pieces with stallions running on dunes, how does Greenbox differ in that perspective?
The horse is put through the X-ray and dissected now. Veterinarians have been doing so for centuries in Islamic traditions and in Saudi Arabia Bakr Al-Sheikhoon has been around for some time showing the diverse paths of research artists can choose. Although he ended up in Sharjah with an image of society as an ever lasting popcorn machine. Perhaps until recently doctors and officers, people with careers that are often taken more seriously than being an artist, would have left art to women and high school creative teachers. I would't mind a good desert and horse painting, but the museum has been discovering more interesting stuff.
Inherently, art is agreed upon as useless, it is our own projections on it that give it value, in that perspective, where does the new artistic scene in Saudi stand?
At least once Abdulnasser Gharem has used an artwork to fysically block people's path, so art can stop and arrest, be useful. Where does the scene stand. I do not really know scenes, but individuals and they seem to be able to convince others to take a second and open look at what they do. Succes abroad also creates respect at home, I think.
The whole scene in Saudi Arabia, from back when I lived in Jeddah in 2002-2003, was very dominated by the religious police; how can one produce any challenging art in such circumstances?
Actually, it is probably more difficult to produce challenging art when all has already been challenged and nobody cares anymore. The religion is the law, so there is no specific religious police. They call it the committee for the promotion of virtue and the prevention of vice. I think it's members might in essence not be so different from artists, who perhaps don't actively promote or prevent, but shape better understanding of both virtue and vice. I have not met them, but I saw some trucks bringing water to mosques, so that's good. They close shops for regular prayer and we might wonder why we don't do so on Wall and Kensington High Street. You can't have an interest in Saudi Arabia and take nothing from it.
Apparently, the whole thing started when you realized that non-Moslems were unable to visit Mecca, were you able to solve that riddle? And why is it of any importance if they could or could not?
I think it started before that, when Holland introduced two different catagories of citizens: 'autochtoon' and 'allochtoon.' An artist's stuggle is usually, if not always, to point out or find unity or perhaps actually unexpectedly creating it along his or her path. The question about Mecca, and perhaps even more so about Medina, has been put to sleep and by way of metamorphosis turned into this museum. Discussing it with me at this moment, would be like talking to Duchamp about the actual plumbing of his fountain.
What are the future plans of your museum and frankly, is there a purpose to making the collection grow?
The museum has no plans, but only insights. That it needed higher ceilings and that such a space one floor down came available was one. There is no purpose in growth. Inevitably the museum's curator stays interested in what artists do and will collect something again. When, if and how to clean up the mess, might be the question at some point.

It is indeed a joy to talk to someone like Aarnout Helb, someone who keeps discovering diamonds in the rough among Saudi Artists in Jeddah. He says he is "deaf and mute when it comes to music" (I am only deaf and wear a hearing aid!) but when it comes to art his discerning eye brings pleasure to all of us. It is a pity that I was in Amsterdam in 2010 and 2011 and did not manage to know about the museum, perhaps next time, "Inshallah" as the Saudis would go.
Posted by Tarek Chemaly at 8:07 AM