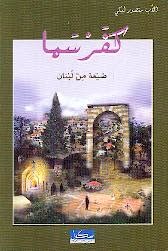 At the end of every academic year at school, students who excelled were given books as a means of encouragement by the school administration. We still have those books at home - a Bugatti retrospective, a Physics book explaining many phenomena, etc, etc.. - but invariably every year we would be given "Kfar Sama" by Mgr. (at the time Fr.) Mansour Labaki. And, for the lack of something better in the Beirut war-torn summer, I would read it again and again and again (By the way the edition I am referring to was different than the above, it was simply blue without an image and just the title and the name of the author). This is by no means a defense of Labaki who has been found guilty by the Vatican of sexual molestation of, and soliciting from, minors (for a Middle East needing more than ever for Chrisitan communities to anchor around their shepherds as Islamic fundamentalism is on the rise, this is indeed a blow).
But since Beirut/NTSC deals with pop culture, and since my whole is based on how pop culture can be a bridging gap of communities and a way to create a collective memory which will lead to national identity, then Labaki is a major interest of mine. His prayers and hymns are in the most renowned in the Maronite community. Our whole childhood is built around "Arafta" (You knew) or "Inchallah el am7a" (May the wheat grain) or "Anta wahdaka da3awt" (Only you called) - and when he appeared on TV for a special Christmas live show a couple of years back the whole of the Christian community could be heard singing-along to his simple but very touching "Laylata al Milad" (Christmas eve).
So all of this, for me, brings back remembrances of full classrooms of a Catholic Maronite school going to church together, of meetings with friends on Saturdays after mass, and many other ritualistic elements which bind communities together. So the Labaki affair is a tarnishing of those memories and a soiling of a collective bond. You can still enjoy his song on this link - but from here henceforth - they will never sound the same.
Posted by Tarek Chemaly at 10:12 PM

I agree, it is such a sad affair. I'm sick and tired of those who are meant to be our spiritual leaders, and yet keep tarnishing the image of Christianity. All we ever knew of Mansour Labaki was the image he wanted to give... What a terrible slap in the face for those who trusted him!

You are correct Vicky, and thank you for the comment. But, just like the director of The Truman Show said when asked how come Truman never saw the truth despite all the signals in front of him - "people only see what they want to see" he retorted. We needed Mansour Labaki, and we stuck the image he gave us never questioning it because it brought comfort to us when we needed it.

Two bigger issues
1- Why he is not in jail. A life of prayer in a monastery somewhere seems like retirement not a punishment.
2- How many more of him are hiding in Lebanon. If he had not done it in France he would still be free to do whatever he wanted with kids he is in charge of.

Correct on both counts. My tentative reply for point 1 is that religious orders and the army have different systems of punishment (I stand corrected) which is why he got "banished" to a monastery. As for point 2) unfortunately this is a severe recurrent problem in the church at large and we all know that the Benedictus administration dealt with the scandal in a very bad way.

Does this not constitute a criminal act? Can he not be prosecuted by the government?
It's a travesty that priests get away with their horrific crimes again and again protected by the church.

He's basically been told to pray and repent and think about his crimes...I'm sure he would like nothing more.

Again, I stand corrected, but I am sure the army and the clergy (both clergies that is - Chrisitan and Moslem) have their own "judicial" system which leads to sentences being different than we, mere mortals, have to put up with.

He is asking for a fair trial. If he was completely guilty, he would keep his mouth shut and accept his punishment. He was proven guilty before he could ever be proven innocent. I have never heard of such a trial. Before you draw a conclusion about him, you need to look at all the facts!

Fair trial from whom? It is known that legally Catholic priests answer to the authority of the Vatican and the Vatican gave a clear verdict. And if you never heard of such a trial that's because the Vatican plays its cards very close to its chest.
Can you be clear as to what facts we should look at? (Please note, I was not defending or attacking Mgr. Labaki in my post, I was just saying that his beautiful hymns we learned as children and which an important part of the rituals of the Maronite community will never be looked at again in the same way).