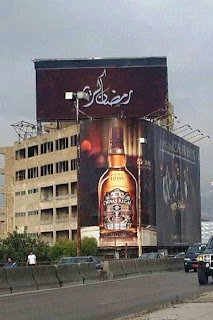 When it comes to bad media planning, this could easily be a huge blunder. Whereas to begin with alcohol is forbidden in Islamic religion, let's say that those who are not teetotal try to make an effort not to drink during this holy month. Then bingo, someone hires a Ramadan Kareem billboard right on top of the Chevas Regal ad (here's to real friendship... Ahem!).
Ok, aside from the fact this is indeed a bad media planning, on second thought, this is Lebanon in a capsule. Permissive, restrictive, avant-guard, old fashioned, oh - and zero coordination.
I still think the crown for the worst media planning still goes to this ad: 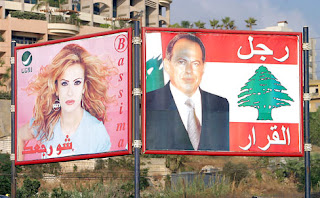 When president Emile Lahoud got his prorogation of his mendate, the streets were flooded with his image and the words "the man of decision" - alongside the new CD by singer Bassima "chou rajja3ak" - "what brought you back?".
Bah! Don't you just love it when the city talks to itself?
Posted by Tarek Chemaly at 5:21 PM