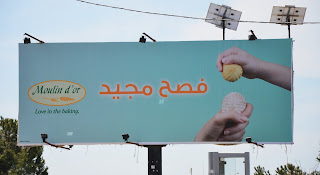 Ah where would we be without Beirut Drive By Shooting! I will give you the best advertising analogy I know "what would Christmas be without Bell's" (Bell's Schotch Whisky)... So thank you for the for photo!
And I am posting it because it is indeed a very good Easter ad... You must know two things: Maamoul is the offiical Easter cookie (refer back to Lurpak ad) and that in Lebanon we do not do egg hunts but rather "egg matches" whereby boiled eggs are stricken against each other until the last standing egg is thr winner... And damn Chrolesterol levels - because you have to eat them eventually right? Which is why the ad is cute. It is actually a Maamoul match instead of eggs.
Posted by Tarek Chemaly at 7:04 PM