"Blast" from the past (and with no bombs!) 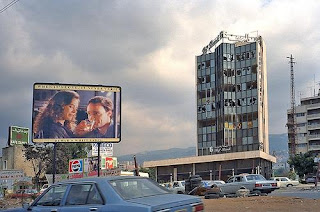 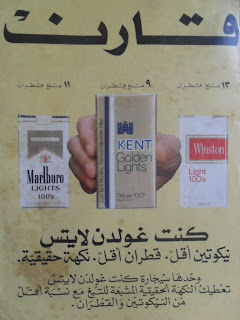 So spoke so much about it, the "when it's love it never varies" so now I have found a visual for it... When was that? Definately early 90s. I cannot pin a more exact date on it. In the commenrcial from which this photo is taken, a woman is seen waiting for her boyfriend to show up to an intimate dinner. He is clearly very late, so she grabs her jacket braces the rain and drives over to where he is. We discover it is a theatre with a plays's rehearsals going on full-fledge. Upset she opens his hand and gives him.... Well, one would assume she gave him back the key to the house! But lo and behold, he open his hand to find a note that says "I missed you"... Isn't love grand? Well, at least in a Dewar's white label ad it was!
And then here's another - and it IS a comparative ad - albeit for cigarettes! Kent Golden Lights vs Winston lights and Marlboro lights! Well, as long as you remember the famous French anti-tobacco slogan: A la fin de chaque cigarette, toujours le meme filtre: Vos poumons (at the end of every cigarette, the same filter: Your lungs), then you'll know the winner of this contest is not you.
Posted by Tarek Chemaly at 6:04 PM